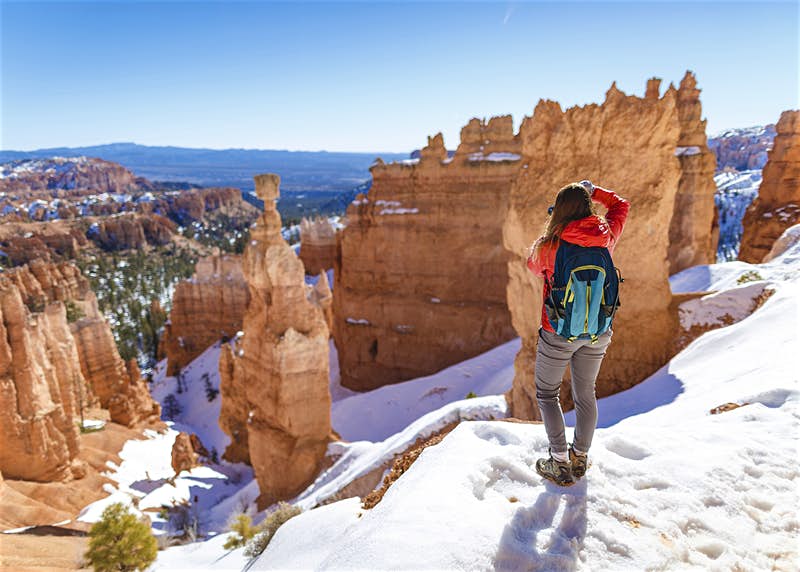 You know it’s winter in North America when ads promoting the Caribbean, Mexico and Hawaii start appearing in droves in newspapers and online. The message: winter is something you should flee.

Counterpoint: those balmy destinations are great year-round. The places that hit peak beauty at the chilliest times of year, on the other hand, are at their best for a short length of time. So grab your parka, embrace the chill and be one of the few to see these rare moments of winter wonder.

Towering red rock hoodoos melting away into rolling badlands under blue jay skies: Bryce Canyon is a stunner at any time of year, but a dusting of snow turns it into a crystalline fairyland. The other benefit of a winter visit: solitude. The height of summer sees 15 times the number of visitors that come during the snowy months. With fresh snow, Bryce Canyon becomes one of the premier snowshoeing destinations in the US. If you don’t have your own, join one of the ranger-guided snowshoe walks where a pair is provided free of charge.

These other US National Parks are pretty stunning too.

If Banff and Jasper National Parks don’t fully satisfy your craving for winter beauty, just outside the parks sits Abraham Lake with a peculiar claim to fame: beautiful bubbles. When the lake freezes over, methane released from decaying matter on the lakebed becomes trapped in the ice, creating a remarkable effect that draws photographers from around the world. To see the beautiful bubbles in person, timing is everything. Go after the lake has fully frozen and is safe to skate on, but while the ice is still clear enough to see through – usually late December into January. And bundle up – this is one chilly adventure.

Find the perfect place to stay in the region.

For most of the year, wispy Horsetail Falls is one of the least remarkable waterfalls in Yosemite Valley, but for about two weeks in mid- to late February, it’s the star of the show. At sunset, when the winter light is just right, Horsetail Falls lights up like a stream of fire flowing off El Capitan, reminiscent of the long-gone tradition of the Yosemite Firefall when burning embers from a bonfire were pushed over the edge of Glacier Point for the enjoyment of visitors below. This natural firefall is popular with photographers, so you now need to apply for a permit from the Ansel Adams Gallery to park along the key stretch of Northside Drive near El Capitan (you can also walk or take the free shuttle, no permit required). At the coldest times of winter, also watch for frazil ice: frozen mist crystals from Yosemite Falls that wash down the creek making a frozen slurry that flows like white lava.

Never been to Yosemite? We’ve got you covered.

Experience the lights in Fairbanks, Alaska

Winter is the season for the northern hemisphere’s most spectacular light show: the aurora borealis, aka the Northern Lights, and Fairbanks has everything you need: most importantly, an international airport really far north. The Northern Lights won’t always come to you – it can take some patience, a little luck and some stalking. For the best viewing, head away from the lights of town. Popular viewing spots include Creamer’s Field, a bird sanctuary on the north of side of Fairbanks, and along Chena Hot Springs Road. For a more adventurous approach, guided tours leave from Fairbanks taking you north along the famous Dalton Highway across the Arctic Circle to Coldfoot and Gates of the Arctic National Park and Preserve.

Chena Hot Springs is worth a trip.

With the exception of a short stretch of road to Mammoth Hot Springs, Yellowstone National Park shuts down to car traffic every year in early November – but that doesn’t mean you can’t go. Old Faithful Snow Lodge and Mammoth Hot Springs Hotel remain open all year, and once enough snow accumulates (usually by mid-December), roads open to snowmobiles and snow coaches. In winter, Yellowstone’s famed geysers and other geothermal features make the snow-blanketed landscape steamy and mysterious. For wildlife lovers, look for bison keeping warm near steaming hot springs, migrating herds of elk, foxes donning their winter coats, and the always elusive wolf. Free, ranger-led snowshoe walks are available, and local guides offer a range of skiing, snowshoeing and snowmobiling tours throughout the cold season.

See the best of winter wildlife in Yellowstone

Until quite recently, the ‘sailing stones’ of Racetrack Playa were a long-standing mystery of Death Valley National Park. Any traveler who makes the long, bumpy trek to the flat playa will see that numerous large rocks have, over time, carved clear, meandering trails across the desert floor. How do they move? Since the 1940s, dozens of theories piled up until researchers finally cracked the case in 2014. The culprit: winter. Thin sheets of ice that form on the playa floor melt in the morning sun, and wind pushes the floating ice against the rock, pushing them along at up to five meters per minute. The Racetrack can be visited at other times of year, but winter is one of the most pleasant times to visit what is often the hottest spot in the US.

The US is full of strange and wonderful places

What do you get when you combine an abundant source of spring water with 7500 feet of irrigation pipe, over 100 shower heads, and a cold, shady gorge in the Rockies? You get the world’s first public ice climbing park with over 200 climbs, and it’s all free. Gear can be rented from several nearby outfitters, and multiple local services are permitted to provide training and guide services for all levels. At the annual Ouray Ice Festival in January, you can watch the best ice climbers in the world compete.

Try these other Colorado adventures while you’re at it

Few things on Earth will alter your perspective more than standing next to a giant sequoia. Even better, stand next to a giant sequoia in the snow with no one around to interrupt your thoughts. An adult blue whale, the largest animal, can weigh 190 tonnes; the General Sherman tree in Sequoia National Park is estimated to weigh 2100 tonnes, and it’s a relative youngster at around 2000 years old. At the Giant Forest and Grant Grove you can join free ranger-led snowshoe hikes, or you can head out on your own on many of the park’s trails. If the kids aren’t up for a long trek in the snow to see more trees, Wolverton Meadow has a winter snow-play area, and you can warm up with a hot cocoa at the Wuksachi Lodge.

Californias has so much to do in the winter

People aren’t the only travelers that flee the cold of winter. Every winter, hundreds of thousands of migratory birds including snow geese and sandhill cranes flock to the marshes and grasslands of Bosque del Apache National Wildlife Refuge south of Socorro, New Mexico, one of the most dramatic birding destinations in North America. Explore the web of trails on foot, or drive the 12-mile auto tour loop to see hawks, eagles, ospreys and more. Come at sunrise to see huge flocks of geese taking off in search of food, and bring your binoculars and your zoom lens. The peak season is December and January, but you can always check the park’s online bird tracker to see the latest avian arrivals.

Ottawa’s historic Rideau Canal – one of Canada’s Unesco World Heritage Sites – is the oldest continuously operated canal system in North America. In the winter, the boats disappear, the canal freezes over and it transforms into the world’s largest ice rink. Lace up your skates and explore the 7.8 km of glassy ice that runs from downtown Ottawa to Dow’s Lake. There’s no need to make this a marathon outing; skating the canal can be as leisurely as you want to make it. Heated rest stops dot the skateway, skates can be rented at numerous spots, and you can warm up with freshly fried beavertails from vendors along the route (donut-like slabs of dough – no beavers are harmed in the process). But don’t dawdle too long – the skating season is only 50 days long on average.

Spend a perfect 24 hours in Ottawa.

Not all winter wonders require a journey out into the frozen middle of nowhere; a few can be found within easy reach of big-city comforts. Minnehaha Falls, made famous by Longfellow’s poem The Song of Hiawatha, can be easily enjoyed within the city limits of Minneapolis. In the cold winters of Minnesota, the 53-foot waterfall freezes solid, forming a dramatic curtain of ice. Enjoy the frozen falls from a safe distance at the open viewing areas – the City of Minneapolis issues dozens of citations every year for people that venture down into the closed area around the base of the falls.