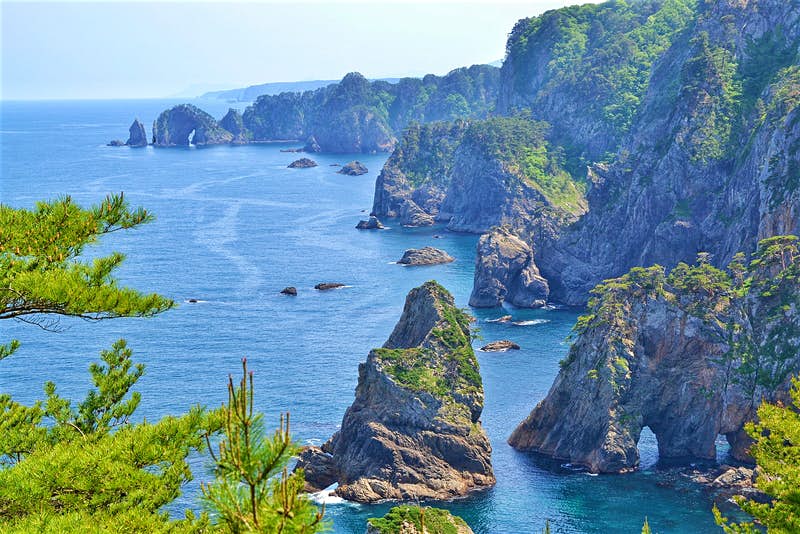 A beautiful natural landscape from mountains to dramatic coast, a traditional craft-making culture, and regional food specialities that include a noodle challenge are just a few reasons to detour north and explore Iwate Prefecture as part of a Japan itinerary.

What’s more, travellers who do make the effort to visit this little-known swathe of Tōhoku will find it refreshingly light on tourist crowds.

With one of the lowest population densities of any prefecture in Japan, Iwate is defined by its natural features. Mountain ranges, deep gorges, beech forests, volcanic peaks and caldera lakes make it a prime hiking, onsen-soaking and getting-away-from-it-all destination. Come winter, the landscape transforms into an impossibly pretty snow country, with low-key ski resorts (such as Hachimantai, at the base of mountain Iwate-san) seeing relatively few international visitors.

To the east is the stunning and varied Sanriku Kaigan (Sanriku Coast), stretching about 220km and passing through three prefectures. Here sheer cliffs and jagged ria formations meet the broad Pacific Ocean, with the Kitayamazaki Cliffs in Iwate’s north just one windswept highlight. The Sanriku Kaigan region is great for a road trip, but for deeper exploration consider walking part of the Michinoku Coastal Trail. Traversing the length of the coast, this series of trails leads through scenery ranging from sandy coves and woodlands to steep bluffs and rural hills, stopping at small towns along the way.

Iwate is the place to take the wanko-soba challenge: discover how many mini servings of noodles you can quickly slurp down, one after another, in one sitting. Not a bizarre game-show task, this is said to be a 300-year-old tradition, and one place to try it is atmospheric restaurant Azumaya in Morioka. Here servers stand by with trays of noodles to refill each bowl the moment you empty it. Diners who can manage 100 bowlfuls (surprisingly not uncommon!) receive a commemorative plaque.

For noodles with less pressure, tasty Morioka reimen is an interesting local speciality worth seeking out. Firm, chewy noodles are served in a chilled broth, usually topped with a boiled egg, vegetables, and kimchi – a spicy giveaway to the Korean origins of the dish.

But it’s not all noodles. A long coastline means excellent fresh seafood, and fertile farmlands raise beef and produce some of Japan’s best known dairy products (in particular, look out for Koiwai farm cookies and cakes). There are also surprising finds, such as L’auréole, a restaurant perched on a remote clifftop in the north of the prefecture, where chef Ito Katsuyasu prepares French-inspired dishes using local ingredients.

The northern region of Japan is home to many traditional crafts, with artisans practising techniques honed through the centuries. Iwate’s most well-known contribution to this legacy is Nambu Tekki (Nambu Ironware), with a history thought to span at least 400 years. At Iwachu ironworks close to Morioka, visitors can observe craftspeople at work casting and detailing the iron; then browse a tempting smorgasbord of beautifully made ironware items in the attached shop – from the traditional and contemporary tea kettles, to wind chimes and candle holders. (Just don’t forget to have your passport on you to receive a tax refund if spending more than ¥5000.) Nambu Tekki can also be perused and bought at Morioka Handiworks Square, a collection of several workshops demonstrating various crafts from around the region, with opportunities to try your hand at making your own.

If it’s the Japan of quiet temples and contemplative gardens you seek, Iwate has those too. Hiraizumi, a former feudal town, is home to the wooded temple complex Chūson-ji, a World Heritage Site. The star here is 12th-century Konjiki-dō, a fully gilded and elaborately decorated pavilion (kept behind glass for preservation), beneath which are the remains of three generations of the Ōshu Fujiwara clan, once rulers of the region. Nearby is the garden of Mōtsū-ji, centred on a large pond. Also dating from the 12th century, this is one of very few remaining examples of a Pure Land Buddhist garden in Japan – these types of gardens were designed to resemble the Buddhist paradise that devotees hoped to eventually enter.

About 80km northeast and a few hundred years younger than the sites of Hiraizumi, the carefully maintained farmhouses of Tono Furusato Village give an insight into rural life in Edo times (1603–1868). This open-air museum features several thatched-roof, broad-beam houses, relocated from around the region and arranged on leafy grounds surrounded by hills. You can also explore inside the houses, where household items and tools from the era are on display and the open hearth may be crackling.

Iwate may not have the cache and big-name sights of Tokyo and Kyoto, but it also doesn’t have the overcrowding, and the lack of polish in some areas is a big part of its charm. It’s also a region home to many inspiring and welcoming communities, continuing to rebuild and revitalise since the devastating earthquake and tsunami of 2011. Iwate is a place to come for unhurried travel: a road trip through the mountains, a stay in an onsen hotel, a ride on the slow train along the coast. And while it’s off the beaten path, this is still Japan – you can of course get here by bullet train.