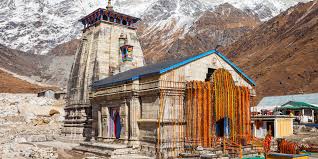 Dehradun/Rudraprayag. If any traveler is planning to visit Kedarnath now, then do not make it till October 15 because till this date the booking of e-pass of the passengers has been completed. While talking to the media in the Collectorate of Rudraprayag, District Magistrate Manuj Goyal clearly said that do not fall into the trap of misleading information and if you do not have an e-pass at present, do not come for the journey.

Goyal made it clear that there is no compulsion of e-pass to visit tourist places other than Kedarnath Dham, but it is mandatory to have an e-pass issued by the Devasthanam Board for darshan in the Dham. He reiterated that since only 800 pilgrims can be allowed to enter Kedarnath in a day, do not take the risk of traveling without an e-pass. Here, quoting SP Ayush Aggarwal, it was said in the news that so far 2500 pilgrims have been returned from Dham due to lack of e-pass. According to the SP also the booking of e-pass has been completed till October 15 on the portal of Devasthanam.

Booking has already been done for Badrinath, according to the
guideline which was issued with the start of Full Char Dham Yatra, according to the limit of maximum number of devotees entering in a day was fixed in all the Dhams. According to this, maximum 1000 devotees can visit Badrinath Dham every day. A week ago, it was said in the news that till October 15, the e-pass booking for Badrinath Darshan had been completed. Now the booking for Kedarnath has also been completed and there are controversies and requests to increase the number of devotees.

xpected heli service but ruckus over passenger numbers, on
Thursday, DGCA team took stock of arrangements, possibilities and facilities etc. to start helicopter service in Kedarnath, while there was uproar over increasing the number of devotees in Char Dham. Has happened. Since the Char Dham Yatra, which began on September 17, was opened to a limited number of people, thousands of pilgrims could not get entry due to not having an e-pass and not following other guidelines. Here, the Uttarakhand government has asked the High Court to file a petition to increase the number of passengers, while the Congress accused the state government of being incompetent for the problems being faced by the pilgrims.

India travel tirt ytra:These are 7 beautiful popular temples of Ahmedabad, whose beauty is still not lacking

India Travel tirth ytra: These are 7 famous and beautiful temples of Mathura, you must also visit