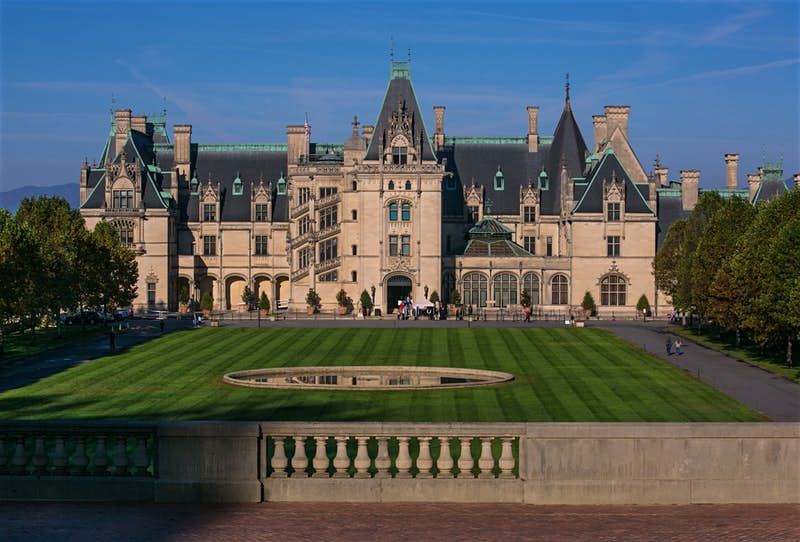 Compared to the rest of the world, American architecture is noticeably younger. In fact, its modern residents have only been designing and constructing large buildings for a couple of hundred years – as opposed to several hundred or even thousands of years in Europe, Africa and Asia.

But older isn’t always better. What’s more, the USA’s penchant for doing things in its own, often regionally distinctive and stubborn way has resulted in hundreds of innovative and eclectic US buildings. When it comes to sightseeing, then, where’s the best place to start? Here are the top 10 most celebrated buildings in the country’s relatively young but impressive history, as voted by the American Institute of Architects.

An enduring symbol of both Americana and New York City since its completion in 1931, this Art Deco masterpiece in Midtown Manhattan stands 104 stories tall and reaches more than 1,450 feet in the sky. Tickets to either the open-air deck on the 86th floor or the windowed lookout from the 102nd floor range from $31-57, depending on age and location. Fun fact: the building is safely struck by lightning more than 20 times each year.

As the official residence and workplace of the United States President, this neoclassical mansion designed by Irish-born architect James Hoban sprawls a modest 55,000 square feet. Self-guided tours are free, but they must be requested through one’s Member of Congress or the appropriate embassy in Washington, DC (for foreigners). Like the country it represents, the relatively young house has survived all-consuming fire, multiple renovations, and 43 peaceful transfers of power for more than 200 years.

This Neo-Gothic Episcopal cathedral is the second largest church-building in the United States and fourth-tallest structure in Washington, DC. About a 20-minute drive northwest of the National Mall, construction began in 1907 but wasn’t completed until 1990. Although admission is free on Sunday, tours on other days cost $8-12 dollars per person.

Situated on the water-filled west end of the National Mall, this serene and open-air pantheon commemorates the nation’s third president and arguably its most important founding father. Overlooking the Tidal Basin of the Potomac River, the neoclassical memorial was completed in 1947 and is an ideal place to escape the more crowded areas of the Mall or take in Cherry Blossoms at their peak in spring. Admission is free and the memorial is open 24 hours.

Like a Statue of Liberty of the west coast, this iconic suspension bridge has been welcoming immigrants and visitors alike since it was completed in 1937. For postcard views and photo opps of the red-orange bridge and famous bay, visit Baker Beach on the southwest side or Crissy Field on the southeast side. If you wish to drive the bridge northbound for no charge, but will need to pay an $8 one-way toll while driving southbound into San Francisco.

Like the White House, the Capitol Building was completed in 1800 in the neoclassical style and is one of the most recognizable symbols of democracy in the world. Located on Capitol Hill at the east end of the National Mall, the four-acre office building is home to the legislative and judicial branches of the federal government. Admission is free but passes are required in advance for guided tours. In addition to visiting the building itself, the Supreme Court Steps, and Library of Congress, head further east to take in the beautiful surroundings.

Dedicated in 1922, this Greed Doric temple contains a large seated sculpture of a reverent and assured-looking Abraham Lincoln, who is widely regarded as America’s most beloved president. Above his statue, the following words are found: ‘In this temple, as in the hearts of the people for whom he saved the Union, the memory of Abraham Lincoln is enshrined forever.’ Like the Jefferson Memorial, admission is free and the memorial is open 24 hours.

As the former residence of the Vanderbilts (once the wealthiest family in America), this massive and perfectly-landscaped Château-style mansion is the nation’s largest private home — even larger than the US Capitol Building. Situated two hours west while driving from the nearest major airport of Charlotte and completed in 1895, tickets cost $60-85 per adult, depending on the time of year. Kids, however, are often free with a paying adult.

When it was completed in 1930, this Art Deco skyscraper on the East Side of Midtown Manhattan was the tallest in the world. It was also the first man-made structure to exceed 1000 feet in height and remains the tallest brick building in the world. While the Empire State Building surpassed its ‘world’s tallest’ status just 11 months after it was completed, some say the Chrysler Building is even more interesting to behold. Since no official tours are offered, however, you’ll have to view it from afar or the public lobby.

Since its completion in 1982, this solemn, black marble memorial has been widely revered and visited by war veterans, their families, and others who benefited from their collective sacrifice. Spanning two acres on a grassy field, the moving memorial stands just northeast of the Lincoln Memorial and is open to the public 24 hours a day. Remarkably, it was designed by a 21-year old Yale student named Maya Lin.