TravelOmama
Home Destinations A guide to haggling in Marrakesh The dazzling souks of Marrakesh are teeming with beautiful objects to be taken home; colourful spices, walls of brightly lit lanterns, and radiantly patterned ceramics, to name a few. They could cost you a small fortune elsewhere but these simple haggling tips will get you a fair price and some unique purchases. Just remember to leave space in your suitcase.

What to know before you start shopping

Marrakesh is the beating heart of Morocco; traders come from all over the country, many of them with workshops in their hometowns.  Different souks will specialize in different products; for example, in the Souq Haddadine, you’ll be able to see blacksmiths at work and buy directly from them. Marrakesh specifically is known for spices; they are locally produced and sold by the bag. There’s also quite a bit of Berber influence in the markets. A nomadic people living primarily in places like the Sahara and Atlas Mountains, their rich culture of craftsmanship and design is seen all over the souks in things like colourful bread baskets, hand-woven rugs, and silver jewelry, with many coming directly from the Berber tribes.

A word of warning about the main tourist souks outside the Djemaa El Fna. It can feel very overwhelming and claustrophobic, and though the stalls are “outside,” the pathways between them are covered. GPS doesn’t work particularly well, so when guides say “get lost in the souks,” it’s a very literal suggestion. Expect intense smells, vivid colours, winding narrow lanes and, perhaps most overwhelmingly, the holler of every shopkeeper that catches sight of you, waving you down into their shops.

While it can get frustrating constantly being badgered by all the peddlers, but remaining civil is very important. Competition is intense, and you must remember this is their livelihood.  Instead of ignoring the shopkeepers or saying something rude, you can say:

“I’ll let you know when I find something”
“I need a minute to look around”
“Do you mind giving me a few minutes to see the stuff?”

If you don’t intend to stop, just keep walking and give them a polite smile and a shake of the head, you’ll be surprised at how often you’ll receive a laughing wave back!

Until you become a seasoned expert, it’s easier to let the shopkeeper begin the numbers game so you have a foundation to work with. After picking out something you like, they will likely start off with an absurdly high number, probably in euros. It’s a number they don’t expect to receive, just as you’ll respond with a number so low it’ll make you uncomfortable.

However you’ll be going up by increments of €1-2 and they’ll be cutting down their asking price by 5s and 10s. The goal, eventually, is to meet somewhere around the middle mark after their second response offer. For example, you’ll see a scarf that you want to purchase, and they’ll say it’s €40. You can say you’ll only purchase it for €3. The actual price for a scarf could be between €5-10. 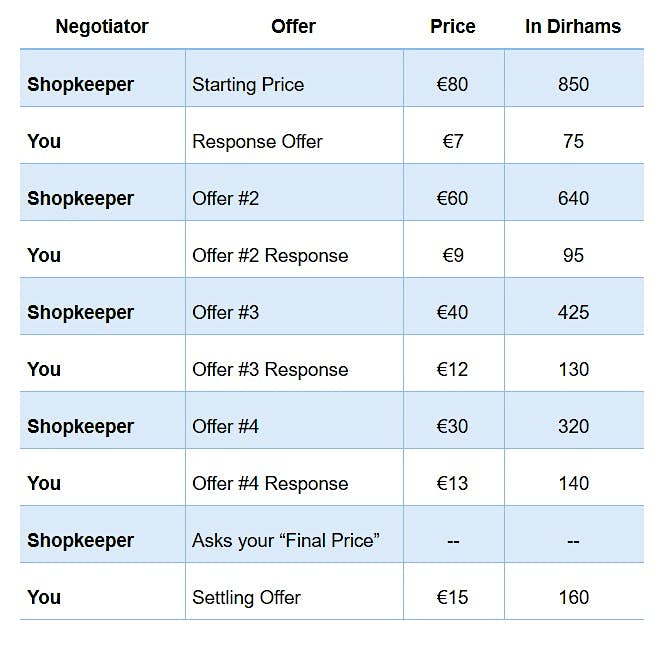 It’s important not to be aggressive. If your seller isn’t giving you the price you want, walk away. Likely that will be the trigger for them to give you a better settling price, and if not, there are plenty of other shops to try. It is also poor etiquette to agree on a price, but then change your mind and refuse to purchase.

Understanding quality is important; if one shopkeeper said he will sell you lanterns for €2 each, but another shopkeeper refuses to sell his lanterns below €15, get a feel for the quality; the €15  lantern is likely made brass instead of tin. Shopkeepers will not compromise as much on their quality products, and it is an insult to the craft to keep on insisting on a lower price.

Start exploring Morocco with Lonely Planet’s video guide to getting around, when to go and the top things to do while you’re there.

Don’t worry if you feel uncomfortable, especially starting off. Haggling is the culture of Morocco, it’s an expectation, and an experience in and of itself. If you happen to wander through less touristy areas, you’ll likely see locals haggling in French or Arabic as well, carrying baskets around to gather their groceries. The biggest difference you’ll see are the goods; kettles, electric fans, and piles of t-shirts and jeans.

What to buy in Marrakesh

This can be tricky, so it’s good to feel around before making a choice. Aluminum lanterns are the cheapest but they’re breakable and poor quality. Many are painted to look like brass or copper, but if you look closely, you’ll be able to see the paint chipping off on a tin base. Actual brass lanterns will not be painted, they’ll be heavier, and the lever will open much smoother.

The range of lanterns available is spectacular, so the below is for a small lantern:

Likely the best approach is to negotiate the price of the most expensive ceramic (salad bowl or dinner plate) and once settling on a price for that, negotiate an entire set. The better-quality ceramics come from Safi and Fez, and are much thicker and often ridged compared to the poorer quality ceramics which are thin and tend to shatter.

For a single large Safi plate:

For a 6 piece set (price will vary based on quality):

You cannot leave Marrakesh without trying tagine, whether at a restaurant or in your riad. You can take home decorative tagines for as little as a €1, to €20 for an authentic clay one to cook with.

The scarves in Marrakech tend to be made in India; the sellers might say it is an authentic Berber scarf, or that they are made of ‘cactus silk,’ but those claims are false; Berber scarves tend to be indigo-dyed cotton, simple and without patterns, and fairly inexpensive. The colourful patterned scarves in the marketplace are imported and mass-produced from India.

However if you do have it in your heart to purchase one, use this guide:

These are very popular leather slippers sold in Marrakesh, though you have to be careful to purchase authentic leather and not fabric babouches.

Carved from trees in the Southern region, you can purchase plenty of beautiful thuya wood items, like hand carved chess-boards with swinging compartments to hold the pieces. Wooden chess boards like this would cost a small fortune anywhere else, but in Marrakesh you can get them for a fraction of the cost, and even see them make it.

There are plenty of items you can purchase that are not on this list; baskets, silver jewelry, mirrors, and so on. A good rule of thumb is to offer them 10% of their original offer, and settle somewhere between that and their second counter-offer. Eventually you’ll build up knowledge about prices and quality, and you’ll be haggling like a Moroccan in no time.